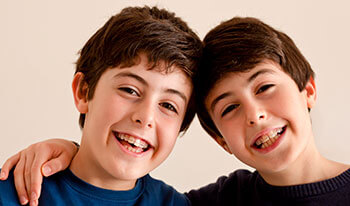 What is an Orofacial Myofunctional Disorder (OMD) or “Tongue Thrust”?

Many of you may not be familiar with the term “Orofacial Myofunctional Disorder” often abbreviated as OMD.  A more common term that has been used to describe an OMD is “tongue thrust”.  A “tongue thrust” is the most recognizable, over-emphasized and misunderstood of the many OMDs.

“Tongue thrust” is now known as an incorrect tongue resting posture and incorrect swallowing pattern and it is the most common orofacial myofunctional disorder (OMD) and involves inappropriate muscle function and incorrect habits involving the tongue, lips and jaw.

Orofacial Myofunctional Disorders (OMDs) may include one or a combination of the following:

Did you know that approximately 80% of patients who have an Orofacial Myofunctional Disorder (OMD) have a nasal airway interference problem and the other 20% usually have a detrimental habit such as thumb or finger sucking?

Most OMDs include one or a combination of factors that may include:

But the most common cause of OMDs are nasal airway problems.  Therefore, patients with OMDs suspected of having airway interference issues are referred to an otolaryngologist (ENT) and Allergist, who are on Dr. Franklin’s team and are well versed in OMDs, to identify and treat nasal airway interferences prior to the initiation of OMT or sucking elimination therapy.

Orofacial Myofunctional Disorders (OMDs) can have a negative effect on the growth and development of the teeth and facial shape.  Dental eruption patterns and dental alignment can be disrupted.  These abnormal habit patterns, functional activities, and postures can open the dental bite beyond the normal rest position which can lead to a disruption of dental development in children and an over eruption of selected teeth in adults.  OMDs can slow orthodontic treatment and it can undermine the stability of orthodontic treatment and/or jaw surgery resulting in a relapse orthodontically and/or surgically. The temporomandibular joint apparatus may become impaired or damaged from abnormal oral functional patterns.

Habitual open lips resting posture (lip incompetence), commonly found among individuals with OMDs, eliminates the beneficial influence that closed lips have on the development and maintenance of a good dental arch form and facial shape. Over time, dental malocclusion, cosmetic problems, and even changes in jaw growth and position are observed in some patients.  Examples of changes that can result from a chronic openmouth rest posture include an increased vertical height of the face, a retruded chin, a downward and backward growth of the lower face (rather than downward and forward) and flaccid and hypotonic lips (Profft, 1986).

It is important to understand that a lips together rest posture and a correct rest posture of the tongue is crucial to facilitate normal growth and development of the orofacial and dental structure.

What is Orofacial Myofunctional Therapy (OMT)?

OMT is designed to not only retrain patterns of muscle function and to aid in the creation and maintenance of a healthy, adaptive orofacial environment but it can help in the retention of the dental and/or orthodontic treatment, in the enhancement of one’s appearance and in the maintenance of optimum dental health for a lifetime of benefits.

What are the goals of Orofacial Myofunctional Therapy (OMT)?

Restoring a normal resting posture of the tongue and lips and eliminating an incorrect swallowing pattern can:

What Age can Therapy begin?

We are all born with an Orofacial Myofunctional Disorder consisting of an incorrect resting tongue and lip posture and incorrect swallowing pattern which we should have outgrown by the time we are six, seven, or eight years of age and it should have transitioned into a normal resting tongue and lip posture and normal swallowing pattern.

Children as young as five can benefit from an evaluation or therapy to eliminate harmful sucking habits.  The general rule in dentistry, and affirmed in pediatrics, is that oral habits should be addressed and eliminated prior to the eruption of the adult incisors, or by age six (Hanson and Mason, 2003).  Without habit elimination, a maxillary posterior crossbite and an anterior openbite, or other malocclusions, will likely occur as well as speech errors.

Age five is also a good age to be evaluated to determine if there are causative factors that require prevention or intervention such as referring a patient for a medical evaluation of an airway interference issue.  Children seven or eight are good candidates to receive some form of Orofacial Myofunctional Therapy.

Orofacial Myofunctional Therapy is also appropriate for adults.  In many instances, an Orofacial Myofunctional Disorder develops in response to late jaw growth, worsening of malocclusion over time, or other reasons such as tooth loss.  Therapy for adult patients is typically efficient.  Adults of all ages are capable of achieving success in treatment.

There are many factors that contribute to the success of the therapy program.  It is truly a team effort.  Effective communication and cooperation between therapists in the dental and medical community is essential.  In addition, successful Orofacial Myofunctional Therapy depends on the patient’s desire, dedicated cooperation and self-discipline as well as support from others.  To ensure optimum results for children undergoing therapy, parental involvement and encouragement is important and necessary.

Orofacial Myofunctional Therapy (OMT) has helped literally thousands of individuals in dozens of countries for over 40 years.  Therapies have been shown to be effective and stable long-term.  The most recent report of OMT results published by an IAOM-Certified Orofacial Myofunction® Therapist and Speech-Language Pathologist, JoAnn Smithpeter, and an orthodontist and department chair, Dr. David Covell, Jr. (American Journal of Orthodontic and Dental Facial Orthopedics, 2010) compares the relapse rate of orthodontic appliances with and without OMT.  Results revealed that “OMT with orthodontic treatment was efficacious in closing and maintaining closure of dental openbites and angle Class I and Class II malocclusions, and it dramatically reduced the relapse of openbites in patients who have forward tongue posture and tongue thrust.  Correcting low, forward tongue posture and tongue thrust swallows minimizes the risk of orthodontic relapse.”

A study done by Hahn and Hahn (1992) revealed that treatment for OMDs should be 80-90% effective in correcting rest posture, swallowing and other oral function and that these corrections are retained years after completing therapy.

There are a host of other studies to confirm that OMT is effective and stable long-term for the variety of conditions involved.  Some selected evidence-based reports are included in the references compiled by Dr. Robert Mason under the heading “Efficacy and Treatment:  Does Orofacial Myofunctional Therapy work?”  in his article, “For Dentists and Physicians”.

Dr. Franklin is always happy to work with dentists, orthodontists, and other doctors to ensure that patients’ needs are handled appropriately and they achieve the care they deserve. Our Dallas, TX office welcomes patients from nearby Park Cities, Highland Park, North Dallas, Plano, Rockwall, Mesquite, and beyond.