Does a “Tongue Thrust” cause anterior open bites?

For years, dentists have told their patients that anterior open bites (bites where there is a gap or opening between the upper and lower front teeth) are created when the tongue is pushed between the front teeth during swallowing known as a “tongue thrust”.

Although the tongue is one of the strongest and most active muscles in the body, does swallowing actually cause dental malocclusions like an anterior open bite?

University research helped to bust this myth. Researchers found that an incorrect resting posture of the tongue against or between the teeth can result in dental changes when there is a long period (at least 6 hours or more hours per day) of an abnormal tongue resting position. When they counted the number of times that patients swallow during a day and then timed the duration of a single swallow, by their calculations, the tongue only contacts the teeth during swallowing for a grand total of 20 minutes a day which is 5 1/2 hours short of the threshold time required for pressure to produce tooth movement.

It turns out that anterior open bites are most commonly caused by poor RESTING tongue position – not the swallow! Although patients with open bites must stick their tongues out to swallow, it is the position of the tongue at rest that opens the bite in the first place.

It’s not the swallow that moves the teeth but it is the incorrect Resting posture of the tongue which is why Orofacial Myofunctional Therapy (OMT) is now referred to as Resting Posture Therapy – not tongue thrust therapy.

Look at the amazing changes in this patient’s anterior open bite after OMT (or Resting Posture Therapy). 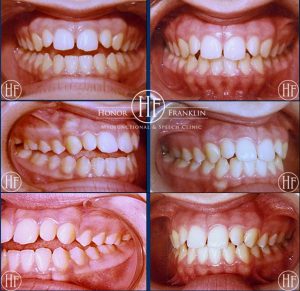 So, if your front teeth don’t touch and you’ve been told you have a “tongue thrust”, Orofacial Myofunctional Therapy (OMT) or -Rest Posture Therapy- may just be the fix you are looking for!